Event Storming is a workshop which makes it easier to understand business domain and to translate it into an architecture of the application. It was first described by Alberto Brandolini in his blog post, in November 2013. I won’t elaborate on what it is and how to conduct this workshop - there are plenty of materials on the Internet. You can read this article, watch this video or read a short book about ES. In this article, I would like to describe my first experience as a facilitator of this workshop and to share some feelings as well as some advice.

We started our Event Storming workshop based on the existing system. This system has a typical mix of business responsibilities, complicated calculations running every HTTP call, which have a negative impact on performance, abstruse business rules imposing themselves in too many places in the system. In a word - monolith 😉

The workshop’s aim was to split monolith into business subdomain - have a greater view on understanding how these subdomains affect one another. Having this knowledge, we wanted to think it over and to come up with some ideas of how to split our system into particular modules / bounded context. In the end, we’ve made it – we’ve accomplished this goal. Part of the result below: 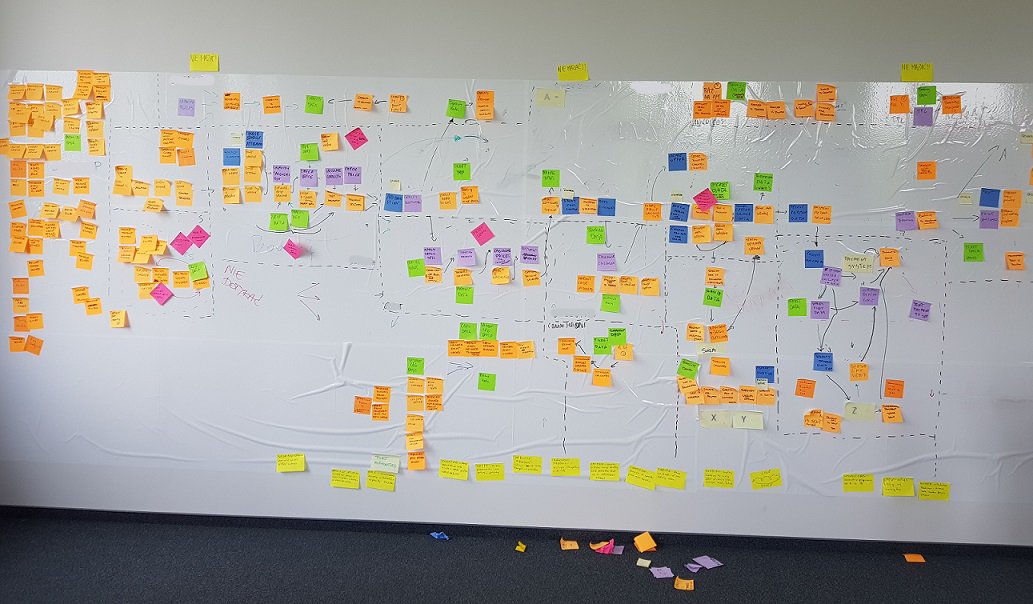 Unfortunately, our system is enormous so we haven’t managed to split it completely. However, we went through the main use-case, which causes various problems and spans across the whole system. It resulted in many different subdomains which encapsulate business logic cohesively and communicate by clear, definite patterns. Such knowledge allowed our architect team to start working on a plan how to split the application into business modules. We were astonished how great understanding we gained in such short time. Spending 8 hours together in front of a wall, with many different sticky cards, helped us visualize business logic and figure out how it affects each other. We wouldn’t get this much value just with sitting at the table and arguing ourselves about proposed modules.

Now, I would like to share some of my thoughts and advice (mostly for my next workshop 😉):

And most importantly - prepare for inner chaos, both inside yourself as well as inside the participants’ minds. At the beginning, you don’t know what this workshop will result in. As the situation evolves, you need to react accordingly and instead of following the textbook example - people are different, the reasons of why you conduct this workshop are different and the target which you are trying to reach is different. Having a well-established system, you need to prepare and run Event Storming differently than running it with startup. Keep your head up and try to find the best way to sort out the situation.

However, one way or another, Event Storming will give you a great amount of insight about your business domain. It’s worth doing it, both at the beginning of the project and while developing it when you need to make some major changes. And it’s really easy, the only thing you need is to have sticky notes, markers, a wall and the people with a knowledge of the domain. Then magic happens  😉